We Fired Our Babysitter

We decided to try a month without TV and movies. I literally pulled the TV off the wall and stuck it in the basement to gather dust. And we decided to call it Screen Free September.

I wanted to get back into a healthy habit environment for back to school. We have always subscribed to the rule of “No TV on school night.” It works for us, but it was already getting some push back on this long time rule.

More problematic, it had become the perfect babysitter; free, easy, clean and hardworking. That needed to stop. I noticed when the TV was off my kids were less creative and independent, and more whiny and irritable.

We needed a detox. The entire family.

There are a few things that I missed about not having a TV. I missed watching a movie snuggled up together as a family. Not much else though.

Time without the TV allowed for longer, deeper conversations. Especially between Derek and I at night. It allowed for more intimacy, and more sleep.

I didn’t have the TV to distract me from Bible study, prayer and writing. Three things that are so life giving for me. I had forgotten that.

The kids played and laughed together. There were even more dance parties (if you can believe it), AND I’ve almost mastered how to “Floss”.

We have always loved our library, but we re-discovered the joys of Books on Tape in the car. Being in the car so much I had resorted to using the TVs in the van to keep Adeline awake. This month I discovered that Geronimo Stilton worked better than a movie! We were both entertained and it led to great conversations. Ones about vocabulary, character, and what we would do in certain situations.

Rooms in our house were rearranged, I even turned a whole wall into a chalkboard wall. Magically, the center of our time together was one another again, not the TV.

Listen, I’m not saying it was all rainbows and sunshine. There were times when I gave Derek that look. The look that said, “I really wish I could stick them in front of the TV, they are driving me crazy!” But those moments passed.

Toys they forgot about, they came back out. Dance parties resumed and chariot blanket races were discovered. Oh and Oliver ate a lot of chalk.

It’s interesting to see how the kids process things, so I interviewed them (separately). They have varying opinions, very different from mine. Their age difference is quite clear here, Landon is 13 and Adeline almost 5. Oliver, 1 year, was unavailable for the interview. 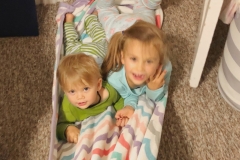 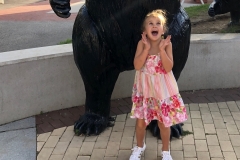 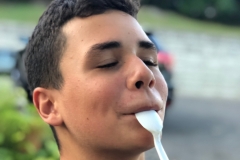 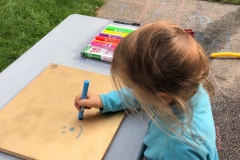 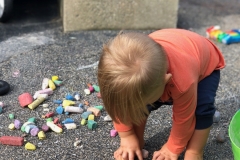 What has been the best part about Screen Free September?

Adeline: That we get to draw on the chalkboard wall.

Okay, [Landon] what was your favorite thing that we did without screen time?

What has been the hardest part?

Adeline: Not having screen time. Mama, can I tell you something? We don’t need screen time, but the TV can still be on the wall!

Landon: Not being able to play video games and watch the Patriots games.

What did you learn about yourself?

Adeline: I can do it, even if it’s hard.

Landon: That I can actually go a month without having screen time.

What would you tell other kids if they were going to do a screen free month?

Adeline: That you should make a chalkboard!!

Landon: Don’t do it.

No, no, [Landon] that’s not what I meant. How about, if you had to make a survival guide for “Screen Free September,” what would be in it? What would be the things that you definitely need?

Landon: Books, drawing supplies and friends. When you hang out with your friends, you don’t need screens.

What’s next for us? We are going to finish strong. The TV won’t go back up on the wall till October 6th, and instead of having two TVs in our house, we will have only one. The smaller one. It’s moving out from our bedroom and into the living room.

In the end, it was worth it. It forced us all out of our bad habits and challenged us to reconnect. Reconnect with one another, and for me, personally, to reconnect with God. Two things that are priceless and life giving.

We are a better family when TV is not a member of the family.

To be transparent, I have to say, now that it’s Fall, I’m excited to snuggle up and watch a Harry Potter or two with everyone. Because, traditions!

I know what you’re thinking, you want to try a screen free month. You should. I support you! And to make it easier and more fun, I’ve created a printable Screen Free Survival List for you!

It’s a list of things you can do or have in the house to make those hard moments easier and more fun. It’s a fun list you can use anytime, really.

It’s my gift to you, and your family. I’m really excited to share it with you. Simply fill out the form below and I’ll send it to your inbox right away. Yay!

I Am NOT Enough

7 Ways to Improve Your Marriage

Hi. I'm Heather Marie, but you can call me Edda Marie.  I am a writer, artist (mostly on children's chalkboards these days), and hugger. I love God, my family, my community, coffee, and the salt water.  Also, my children will tell you, I am extremely competitive at board games and hide-and-seek. I am.

Shop at The Daily Grace Co.

Why I Walked Away From Jesus