Three years ago, when Landon was ten, we sat down with him and had “the talk”.

It was never something I dreaded, it wasn’t uncomfortable.

It certainly wasn’t the last sex talk we had with him. We’ve had many since, and continue to openly discuss sex with him. We’ve even placed safe people in his life for him to talk to about sex when he doesn’t feel he can come to us. He knows this, and they know this.

I digress, we had the sex talk. And Landon began to ask questions to try to make sense of his world.

“So, you and Dad had sex, to have me… he moved to California, and then we moved back to be with us, and then you got married and had Addie?” It made sense, I guess. I always thought he remembered our “just us” days. I now know he doesn’t.

I looked at Derek and asked, “Are you ready?” To which he nodded yes. It was a whole new chapter of our lives opening up.

I took the lead and explained, at a ten-year-old level, that I had gotten pregnant at 21 and for a while it was me and him. I talked about Derek’s love for him and how he is his “Dad” and has been for a long time.

We talked about love and sacrifice.

I didn’t reveal his biological father’s name at the time. I didn’t give him more information than he needed. (I also didn’t tell him that my friends and family referred to his bio-father as the “sperm donor”.) I only gave Landon the details he could handle.

That was on June 14th, 2015, what is now known as “Gallant Family Day”. A day we celebrate every day with joy and gratitude.

Since then, Landon would ask me periodically if Derek would adopt him. Derek and I had originally went to a lawyer before we got married. We wanted to see if we could surprise our friends and family with an adoption ceremony at our wedding. (The reasons it didn’t work out are for a different post one day.)

In the summer of 2017 we began the process of Derek adopting Landon, and changing Landon’s last name. On July 31, 2018, after a new emotional journey and legal process, Derek adopted Landon.

It has been such an emotional journey for me. Thinking back to the beginning everything about 14 years ago, now.

I am so grateful for the husband and father Derek is, but didn’t have to be, to Landon. The father he is for all our babies.

I’m grateful for the journey we’ve been on, and for the time to make it official.

The truth is, we have amazing family on both sides. Derek’s family accepted Landon and I both from the very beginning. Doris, his Mom, even referred to Landon as her “ready-made Grandson”. They’ve all loved us so well. I’m grateful.

On his Adoption Day Landon said he felt a sense of love and clarity.

Derek at one point said, he didn’t understand why I had been so emotional about it, “I’ve just always been his Dad. That’s who I am.”

That, right there, is why I have been so emotional. Because of how blessed I am that God put us together, the three of us. We’ve all been through so much together.

It felt like a puzzle piece was pressed into puzzle the wrong way, and now, it’s right. Everything is, we all fit. 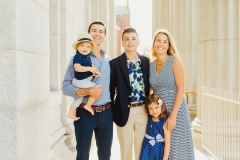 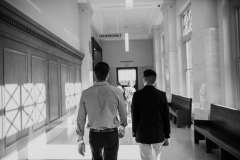 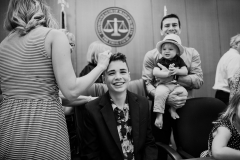 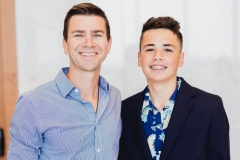